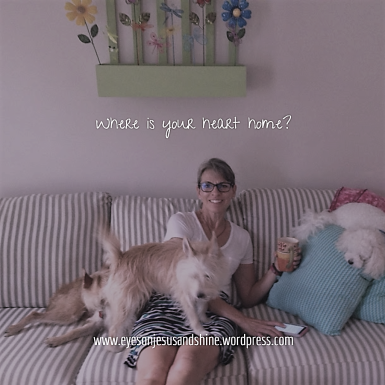 if we were sitting around my favorite room of my house in our pajamas enjoying our favorite hot tea {mint for me please} and eating popcorn laced with plain M&M’s,  how many different responses would result from this question:

I imagine we would hear as many different responses as people willing to answer the question.

The definition of home is dependent on geography, culture, and generation.  And in various seasons of life home may take on a whole new look, size, and feel.  Simply contemplating home can evoke some strong emotion – whether positive or negative.

The concept of home, I think, is closely tied to our hearts.  And as such, the idea of home has to do with family, tradition, belonging, growing up, provision and participating.  Home is a memory induced feeling we long for when we go out into the big wide world on our own.  Or a fairy tale fabrication of what we always wished home would be for us with a vow of creating our own one day.

Where is your heart HOME?

Scripture abounds with stories of home.  Homes lost, left, destroyed, battled over, redeemed and rebuilt.  Homes filled with families, faith, fear, obedience, and deception.  There are the elaborate homes of kings and the tents of the wandering nomads.  Reading Scripture with an eye for home, it’s amazing and comforting to recognize – HOME is God’s idea.

At the beginning of Genesis, we should be in awe of God’s purposeful and loving creation of a perfect garden dwelling for His first man, Adam, and his first woman, Eve.  God delighted in His people and the home He provided for them so much so God, Himself, would meet up and walk with them in the cool of the evening.

Adam and Eve forfeited the only home they had ever known with their rebellion against God.  They were forced to leave home, but God didn’t leave them.  Where was the first couple’s heart home?

What about God calling Abraham, out of the blue, to pack up and leave his homeland not having any idea of his destination.  Abraham might be the original pioneer, taking his family, their belongings and livestock on a continual journey across foreign territory until God said, “Welcome to your new home, Abraham”.  Abraham chose to believe God for His promise, so where was Abraham’s heart home?

Moses, a Hebrew baby in a basket, was taken into Pharaoh’s home and was raised to manhood as a royal son of a foreign father.  Later in life, Moses found himself caught between his bloodline and his adopted culture.  After killing an Egyptian man, Moses fled to make a home of hiding in the desert. 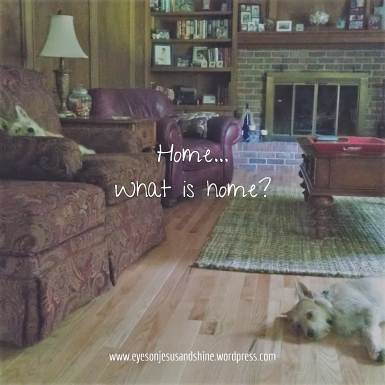 God called to Moses from the burning bush and told Moses to go back to Egypt.  Way out in that far-off land God commissioned Moses to lead the Hebrew slaves out of captivity and into their true home – the Promised Land.  Where was Moses’ heart home?

David’s home was first a sheep pasture and then a battlefield and finally a King’s domain.  Where was David’s heart home?

And what about Jesus, Who willingly left is heavenly place as the Word of God and took on flesh to live on this earth and call it home for 33 years.  Where was Jesus’ heart home?

Does your heart long for home?

When I ponder the word HOME, scripturally my mind automatically turns toward Naomi whose story is told in the book of Ruth.  Naomi left her home – her people – in Bethlehem of Judah.  Surely this was Naomi’s heart home.

I wonder about the ripping of her heart – obedience to her husband, leaving loved ones behind in a famine, obedience to God, a mother’s desire to save and protect her children.  I wonder… did Naomi pack only her physical body, but leave her heart behind.  Did she agree with her husband’s decision to leave their spiritual heritage – their culture and tradition?

I read the words of Scripture and I feel Naomi’s pain – the last hugs of family and friends, the heart-wrenching tearing away, and the tearful sobs deep in the gut.  Surely, Naomi wondered if they were doing the right thing.  Why would they leave their heart home?  Why would they leave God’s people in Bethlehem to live in a foreign land?  Would they allow their children to be raised on unfamiliar food amongst a pagan people?

Did Naomi’s heart ache with a longing for home?

Later, after the men were buried, three women remained as widows.  Naomi, who understood the searing pain of leaving everything familiar insisted the younger women return to their families and stay in their homeland.  Yet, Ruth dramatically clung to her mother in law in love and devotion.  Did Ruth’s heart long for the homeland of promise she had so often dreamed of through Naomi’s reminiscing? 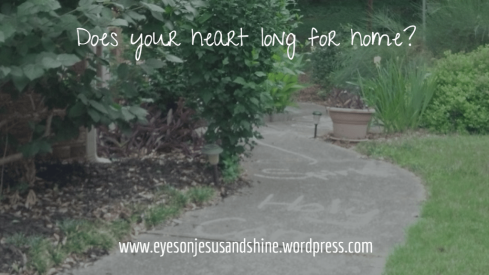 I know.  It happens to me.  Often.If you’ve ever left your heart home you feel that familiar tug – even as you read these words.  Perhaps you find yourself flipping through an emotional photo album of familiar memories.  The emotions are tangible – you can taste the food, smell the flowers, see your old best friend and hear the accents of your former neighbors.

My heart home is the state of Florida where I grew up, went to college, began my career and got married.  Twenty years and almost all my memories are saturated in humid, salt breezes.

One day my newlywed husband asked excitedly, “Do you want to move to Atlanta?”  My response did not share his enthusiasm, rather I squeaked out a panicked, “NO!”

Why would I want to move up north?  It gets cold there and it is far from the ocean.  My head was spinning as I wondered why this was happening.  A move north had been nowhere on my radar.  Nowhere in my plans.

The answer to why was that my husband’s position within the bank was being relocated from Orlando to Atlanta.  He was excited because he had previously lived in Atlanta, and since he was originally from Dayton, Ohio, Atlanta was still considered living in the south.

I knew immediately there was no point in arguing or negotiating.  This had to be a test… a newlywed test of the vows.  I had just a month previous promised to go wherever he would go, live with my man in peace and assist him in his life’s work.  But.  Wait.  This isn’t fair.  I didn’t know I was promising to… leave. my. heart. home.

We’ve now lived 29 years away from my heart home.  How can the tug to “go home” still be so strong when I’ve lived away longer than I lived in my heart home?

We visit, of course.  We dream of one day pulling up roots and returning to my heart home along one of the coasts.  We say we will, but only God knows if this is His best plan for us.

It’s here that I recognize the deep longing for our heart home is knitted into the fabric of every one of us by our Creator, Father God.  We were designed for perfect garden living in a Kingdom as princess or prince forever in the worship of our King Jesus.  And yet for a little while, we have been assigned to live here on this earth as Ambassadors of our King in this foreign land.

Yes, we are a people with hearts deeply longing for our heart home.

Though I want to go, I’m willing to stay put as a matter of obedience.  With this new perspective, 29 years in the development, I see my time here has been beneficial.  There’s been Kingdom work to do here.  I see more clearly today Atlanta is home because this is where we are family – biological, faith, and neighborhood family.  Our roots are dug deep.

In truth, the idea of hearing my husband say, “How would you like to move to South Florida?” sends a hopeful thrill through my spine.  And yet the true revelation is in my soul’s anticipation of finding my forever heart home with God.  I’m not ready to leave this earth yet, but when I do…

The deep longing for my heart home will be finally and completely fulfilled.

I am an avid follower of Jesus. I have been since my early twenties when I met Him personally and received dramatic healing in my body and mind. After many years of marriage and raising sons into the teen years, I was challenged to explore the duplicity of my spoken faith followed up by fearful actions. I received the challenge presented by both of my sons. They love me and so they dared to confront me with the truth. Chips off my proverbial block! I determined then {more than a decade ago} to overcome fear with faith that was more than words. In my late 40's I made a decision to leave the desert wandering behind and set out to pursue the abundant life Jesus promised His disciples. I am a tentmaker {actually a reupholsterer} by day, which helps to support the call God has on my life to serve Him in my community. I thoroughly enjoy my work. Repairing and restoring throw-away furniture is a fulfilling creative outlet. More so, my Cheer House Repair and Restore business opens the door for me to interact with my community. My passion is to walk so closely to Jesus that others want to know Him too. I love to introduce women to Him as we walk, talk, and work together hand in hand through everyday life. Nothing thrills me more than to watch someone fall so in love with Jesus through His word and conversation; learning to trust His heart and receive His great love! I have been married to my dear man for over 30 rollercoaster years. We're simply thrilled that our latter days are more joyful and purposeful than our first. Together we have two - grown young men on their own journeys. Additionally, we share our home with 3 lively rescue pups. I look forward to having you join me on this journey of faith... Bold feet, humble heart Psalm 131 ~ Lisa View all posts by Lisa Brittain

2 thoughts on “A heart longing for HOME”